For this week’s Pic of the Week, we are going back a couple of years to my trip to Indiana. We were having a family reunion up in the Hoosier state and with that came the opportunity to photograph and explore the local landscape. I made a journey to Shades State Park near Waveland, IN. This was a little over an hour away from Indianapolis and the airport. Today, I would by flying back to Texas, but I wasn’t leaving Indiana until after 5pm. Then I had a two-hour layover in Dallas before finally getting back to Wichita Falls. This put me arriving back at home around 11:30pm so I really wanted to enjoy the day.

The previous three days I spent checking out McCormick’s Creek State Park, Spring Mills State Park, Bluesprings Caverns, Cataract Falls and Brown Valley State Park. Unlike those days, the weather on this day was particularly nice. A light rain hung around early morning and messed up my chances for a sunrise shoot, but after saying my goodbyes to family I was on the road heading to Shades state park. I didn’t know too much about this park, but after doing some research I saw something that stirred my curiosity. A fiendish sounding landmark known as the “Devil’s Punchbowl”. With such an unusual name I wasn’t sure what to expect.

I arrived to Shades state park just after 11:00am. The skies were still overcast and a rain shower had just moved through the area. This brought the temperatures down to a pleasant 71F which was much better than the 96F from the day before. I pulled into Shades state park and noticed the parking lot was empty. Naturally, this excited me I like being alone out in nature and I don’t like having to fight people coming into my compositions. Not soon after I unloaded all my gear a brown minivan pulled up and a family of seven leaped out. It was time for me to get on the trail. The hike started like most others, flat on a wide trail with packed dirt. Thick vegetation above me blocked all the light and made it feel closer to nighttime than midday. Shades state park gets its name from the early settlers of the area. In the 1800’s this area was referred to as the “Shades of Death”. The unbroken canopy of trees and vegetation keeps almost all light from reaching the ground. Its easy to see why they though this place creepy. No sun, no wind, and a thick canopy of trees blocking everything.

The path quickly transitioned from the packed dirt to an old rickety staircase. Here I would begin my descent into the Devil’s Punchbowl. Two intermittent streams send water down the ravine forming a circular grotto undercut in the sandstone—this formation is the Devil’s Punchbowl. These high bluffs are coated in thick green moss and vines and ferns dangle from the rocky cliffs. For a moment, I forget I’m in Indiana. In my mind I was on the fictional island Isla Sorna from Jurassic Park. Sure, it wasn’t Hawaii, but the heavy canopy, fern plants, and eerie green rock made the area feel prehistoric. I might as well expected pack of Compsognathus to be hiding somewhere in the bush. Once down in the grotto, I immediately started to notice the incredible carvings on the rock. Although the area was beautiful, it was all overwhelming trying to bring a scene of chaos to some kind of order. It also didn’t help that the family of seven was now down in the Punchbowl and the kids were screaming listening to the echoes off the canyon walls. 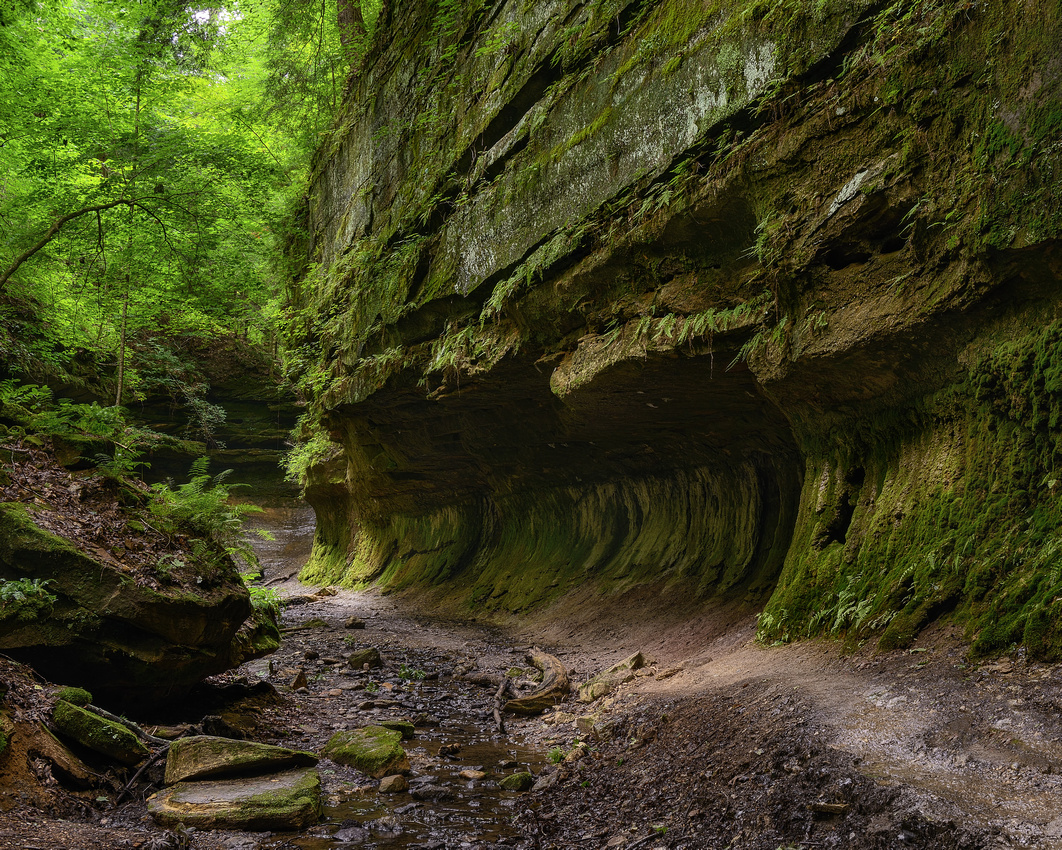 Trying to avoid the family as much as possible, I started hiking away from them and when I rounded the corner, I spotted this scene. A small shaft of light was illuminating a small portion of the cliff. I had managed to find one of the few breaks in the canopy and it was paying off. The moss-covered rock glowed in the direct sun while the rest of the are received soft reflected light. I could hear the family starting to close in on my location and I knew I didn’t have much time, so I set up a simple but effective composition and captured a few frames before moving on. This was the only light I saw all day and after finishing up at Shades state park I made the drive to Indianapolis and eventually made it back home to Texas. I wish I would’ve had more time to explore this park, but who knows maybe I’ll return to it again someday.

Ashlee Madden-Jacobi(non-registered)
Lovely write-up and image. If you do return in the future, you'll probably end up going with your wife. ;) Gorgeous scene.
Elizabeth(non-registered)
Beautiful image that has a calming effect. I could look at it all day.
No comments posted.
Loading...
Subscribe
RSS
Keywords
Pic of the Week nature landscape travel sky Texas night rock Oklahoma weather
© Ben Jacobi
Powered by ZENFOLIO User Agreement
Cancel
Continue