Our 2022 has started off just right! A winter storm moved through our area on New Year’s Day and my lovely wife suggested we drive to the Wichita Mountains for some photography. It didn’t take much coaxing on my part, and we were out the door braving the blustering wind for the sake of a photography adventure. I had some concerns with the possibility of icy road conditions, but was very relieved to find the roads drivable. We had missed the sunrise and most of the good light, but we were still excited to be out exploring this wintry wonderland before us. As we drove farther into Oklahoma we started seeing more patches of snow along the roadways. This gave us some hope that the Wichita Mountains might still have snow in the low-lying areas. To our delight, we could see a bright Mount Scott on the hazy horizon glowing in morning sun.

We pulled into the refuge and were amazed at the transformation. Just a few inches of snow is all it took to let us see the Wichita Mountains in a totally new way. Out in the open prairies very little snow remained. Some small drifts accumulated on the roadsides, but where we found the most snow was deep in the canyon walls protected from the wind and sunlight. Armed with this knowledge, we drove to the Quetone Point overlook and hiked the short distance to an area we simply know as “the canyon”. This tributary of Little Medicine Creek has carved through the thick granite to form a gash in the landscape. The chasm is around 50 feet deep, no wider than a football field, and extends for about .3 miles. Perhaps the most interesting feature is then undulating pattern of the landscape. During the springtime the slopes and hills are covered in lush green grasses and vibrant moss. It’s what I imagine the Scottish Highlands look like. It just seems out of place for the area—but then again so does a mountain range in the middle of the prairie.

I made my way to the canyon rim passing a frozen waterfall along the route. I spent a little bit of time photographing the ice patterns before moving on closer to the edge. I inched my way closer and closer to the edge of the canyon, with each step revealing the depths of the chasm below. I reached a boulder near the end of the canyon and climbed up top to afford me an even better view of the creek. Now the sun was shining intensely on the south side of the canyon sending a dramatic sidelight over the rocky bluffs. I realized my regular lens would not do for this composition. To convey the scale, depth, and size of the canyon I needed to use my ultra-wide-angle lens. Now with the proper gear equipped, I began scanning the scene looking for the best composition. Four granite pinnacles protruded from the grassy surface just across the way each one catching some of the late morning sidelight. This strong contrast and shape really added more depth to the scene. I zoomed my lens out to around 16mm and captured this wide field of view of the “Wintry Chasm”. 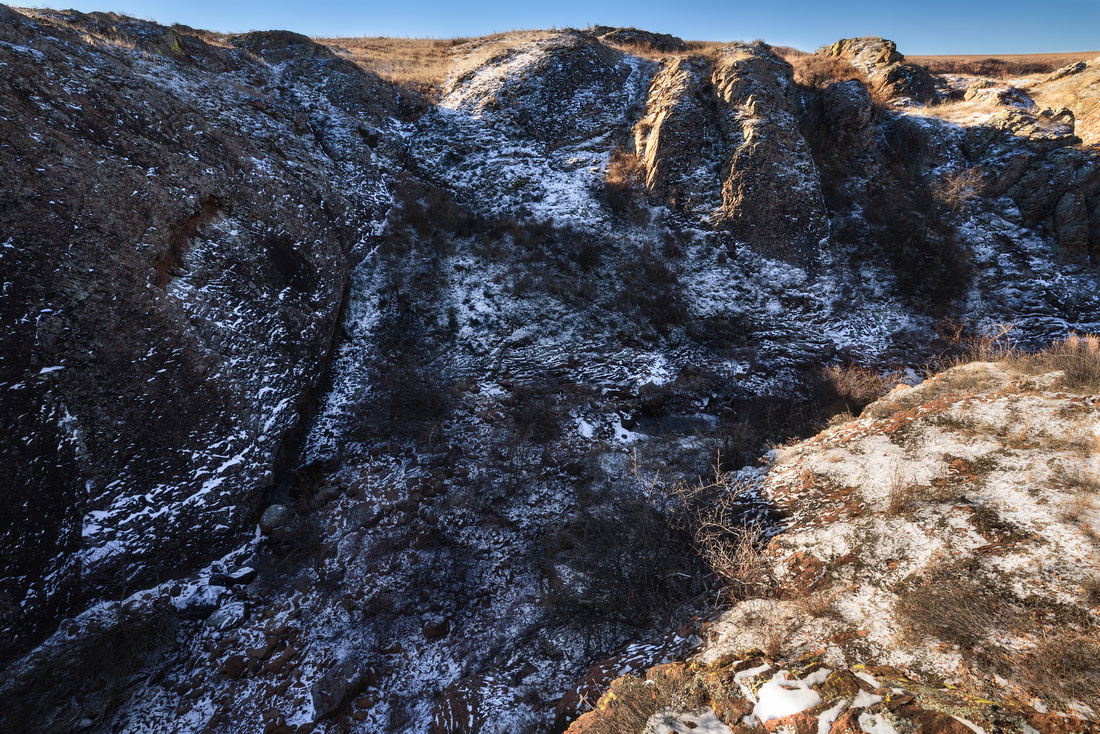 Wintry ChasmA dusting of snow settled on the exposed rocks and cliff faces of this small canyon in the Wichita Mountains Wildlife Refuge.

Down below pools of water and trickling waterfalls had been frozen in the frigid temperatures and with very little sunlight expected on these features they would likely stay frozen for some time. Curiosity started welling up inside of me and I began to look for the easiest path down into the canyon. It took some minor navigating and scooting on our butts at one point, but we made down into the chasm. Tall slabs of granite enclosed us on both sides as we carefully headed upstream to a frozen waterfall. I’ll stop the blog post here for now. Since we had such unique conditions, I captured several interesting photographs that I would like to share with future blog entries.