Picking up from last week, I had just finished up shooting my first composition of the morning. As I was reviewing my images, I noticed some fog churning over the waters of McGee Creek Reservoir. The light was catching the fog in such a way it backlit it in a soft golden glow. My attention was immediately drawn to the grove of trees across the peninsula on the other side of the lake. A smattering of fall color was peeking through the evergreen snatching up rays of sunlight and producing a wonderful color contrast to the scene. I changed out my lenses and began fine-tuning a new composition.

Since my subject was on the other side of the lake, I switched out to my 70-200mm f/2.8 telephoto lens. This allowed me to bring the subject closer to the environment and compress the whole scene. As I zoomed closer and closer, the distance between trees shrank, and I was able to compose the rocky shoreline, the swirling fog, the trees in autumn foliage, and the pine forest all in one shot. When focusing in on the little details, its amazing what images can be created. I stood on the rocks, taking photos while watching the fog roll over the lake. 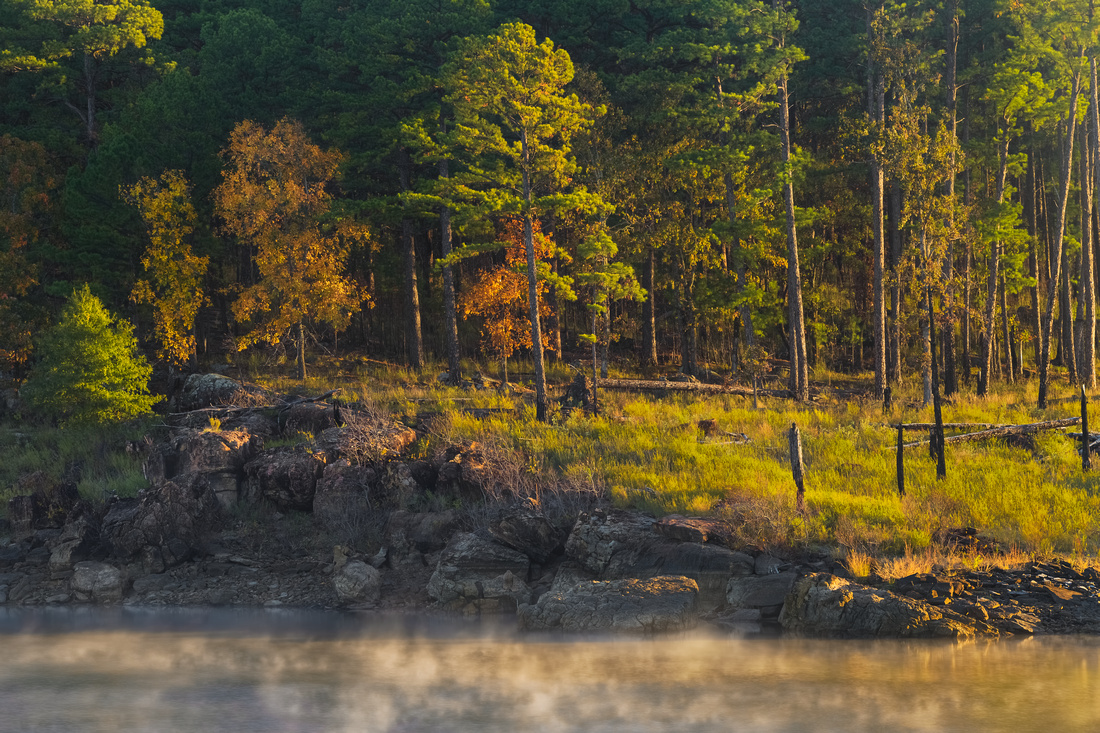 I really liked this composition and thought it could make for an interesting shot. The strong diagonal of the rocky shore is balanced by another strong opposing diagonal in the illuminated treetops. The rocks trend in an upward fashion, while the trees slope in a downward direction. This creates tension and draws the eye through the photo, although it does seem to keep my attention more focused on the left side than the right. But having a brighter right side draws the eye back, and the cycle repeats itself. The side and backlight also help give the image great depth.

There are several layers in this photo. The lake and fog are one layer and are stopped at the shoreline, which divides the image just under hallway up the vertical. Since the rocks are not being hit with direct light, they create a nice light to dark transition as the eye leaves the bright fog into the shadowy boulders. The next layer is the illuminated trees and grasses. These are filled with areas of micro contrast and detail and color. Behind that layer we have the final layer of dense pine forest not yet in the sun. Again, this makes another light to dark transition and keeps the eye moving through the whole image.

I was only able to capture a handful of exposures before the morning sun began to burn off the fog on the lake. Though I was quite happy with what I had captured so far on this morning, soon the sun would be rising above the forest, and images with good light were going to be scarce. I packed up my camera gear and decided to continue the trail, revisiting some of the locations I scouted the day before. While I did find some interesting shots, nothing really matched up to what I captured early in the morning. For now, I would return to camp and get a hot breakfast after a successful sunrise shoot. We would be breaking camp and heading to our next destination—McGee Creek State Natural Scenic Recreation Area. But that’s a story for another week.