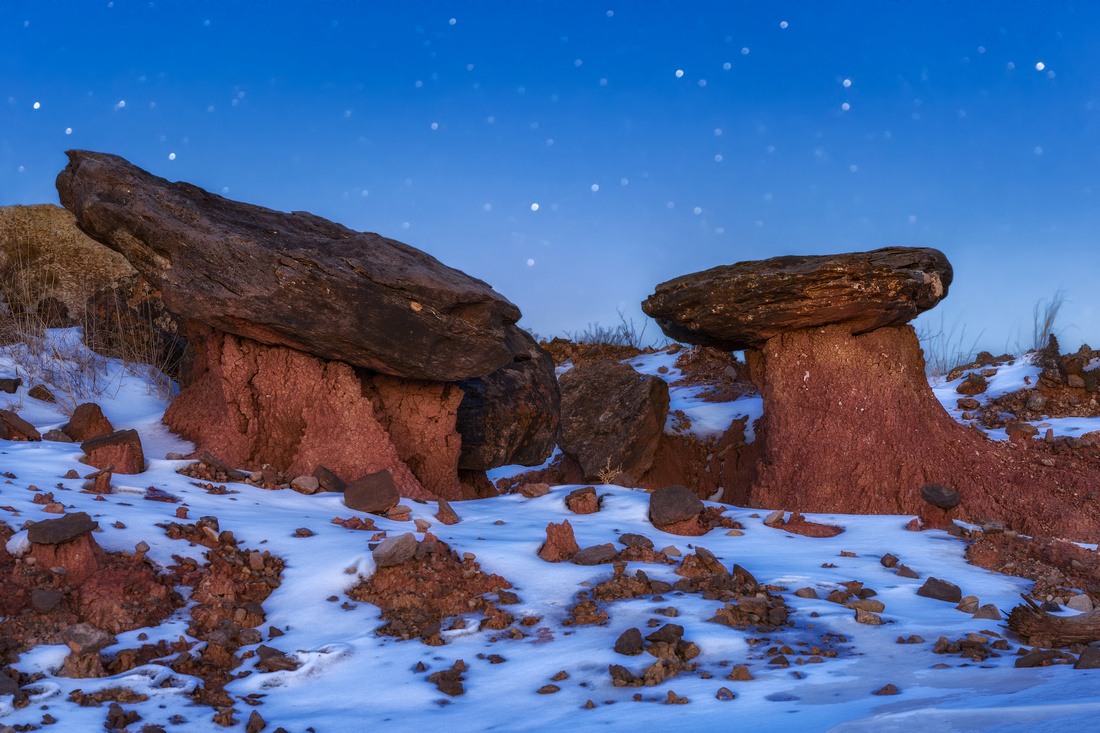 What do hoodoos dream? Do hoodoos even dream? Am I just asking frivolous questions to fill in the introduction? Some of these questions need responses, but sadly it is only up to our imagination to answer them. Maybe they hoodoos are just daydreaming…er nightdreaming? I have small collection of images that call “Dreamscapes”. These photos are just so fantastical or ethereal that they almost transcend the reality of the moment and I find myself drifting off into another world. These are the dreamscapes. There is some criteria for an image to be dreamscape, but what I have noticed is all of them are captured during the night. Maybe it has to do with my fascination of the night sky, but every time I’m out under the stars I feel transported to another world. And if you can get unique photogenic conditions (such as snow on the ground) it immerses you more into the fantasy.

At beginning of February, a potent winter storm made its way through our area bringing bouts of freezing rain, sleet, and snow. It was so bad that I was called off work both Thursday and Friday that week. Luckily, the sun came out Friday and Ashlee and I were able to get out and look for some photographs. I had the idea to visit a little hoodoo garden that’s close by—well, closer than Copper Breaks. Ever since I visited these little geological rock formations, I became intrigued with the idea of capturing an astro-landscape shot with the hoodoos. Unfortunately, there aren’t that many compositions that show the best angles of the hoodoos. This was going to need a different approach.

We made our way down the slick and icy road carefully navigating the curves and twists with caution. The constantly blowing winds built up snow drifts around the barbed wire fences. Some were over a foot deep. It took a little bit more time, but eventually we arrived on location. The sky was completely clear and perfectly still. A gentle breeze blew in from the south. The sun was starting to set and our subject was washed with warm golden light. Around the hoodoos snow had accumulated in small swells as it moved along the low rolling terrain. This encased the hoodoos in a wintry blanket and added a fantastical feel to the image. I had found my composition and I quickly grabbed my camera and planted my tripod.

The sky transitioned from a pale blue-yellow gradient to a pastel pink and purple hue. Out in the distance, a coyote called signaling the start of evening. The temperatures began to drop rapidly, and we were poised waiting on the stars trying to distract ourselves to keep warm. Blue hour had started, and it was time to start capturing my base images. Since I had such a close and tight composition, I had to focus stack to get both hoodoos in sharp focus. Instead of having sharp stars, I chose not to adjust my focus rendering the pinpoints of distant light into large glimmering discs in my viewfinder. This made the image look even more dreamy. Now we just needed to wait for a few more stars to pop out.

Finally, the stars revealed themselves at the beginning of night. I captured my star exposures and we called it day. In the western horizon the crescent moon sank, and the orange glow from the sun extinguished. We carefully made our way back on the icy road and safely made it back home. The blending of this image took a lot of extra time and patience, but I think we can agree the end result was worth it. I combined a total of 12 images to create this final composite. The first two were the focus-stacked hoodoos at blue hour, then another single blue hour exposure just before the stars fully came out. Lastly, I took nine frames of the stars and stacked them to reduce the noise and blended all these together for the final image.