“View on the Brazos”

When you think of the Brazos River certain historical names and events may come to mind such as: “Sam Huston”, “San Felipe”, “Washington on the Brazos”. Names that are endemic to Texas heritage. Tall tales of battles with native Americans, outlaws on the run, and the hardship of pioneer settlement, are among some of the stories the river holds. Being one of the largest rivers in the state of Texas there’s no doubt it plays a major role in Texas life and culture. Texas author John Graves wrote about it in his book “Goodbye to a River”. One of which, I highly recommend you check out.

After reading his book, it should be no surprise that I became interested in the seeing the Brazos River. One of the best and most accessible places to view the river is at the end of Possum Kingdom Lake just downstream of the dam. The Brazos River Authority has established a campground and picnic area under the Red Bluff mesa. You can also hike the Brazos River Nature Trail that offers several up-close views of the river. But I was more interested in capturing the entire landscape of the area and to do that I would need to get much higher.

Fortunately, the BRA’s (Brazos River Authority) main office is located on top of Red Bluff. I wanted this shot for sunrise, but Ashlee wanted to shoot wildlife. So, we made a simple decision. I would drop Ashlee off at the Brazos River Nature Trailhead so she could shoot wildlife, and I would drive up to the Possum Kingdom Dam overlook near the BRA’s main office to shoot sunrise. When I pulled into the gate I was a little upset to see a tall iron fence blocking my view from the overlook. There were just a few gaps where I could manage to fit my camera in place and have an unobstructed shot of the landscape.

From this overlook, you can take in the sights of the Morris Sheppard Dam and placid waters of Possum Kingdom Lake. Being atop Red Bluff there is a spectacular view of the Brazos River as it snakes its way eastward. Towering mesas and cliffs line the edge of the river creating some dramatic terrain and relief. After carefully scouting the overlook, I was able to find an angle on the river and landscape through the fence. It was a little sketchy, but I was able to capture a nice photo even if I was putting my equipment at risk.

With my camera poised and at the ready I waited for the sun to break the horizon. Shafts of gold light came streaming across the scene and lit up the distant cliffs and mesas. The frost from the crisp morning gleamed in the sunlight shining on the treetops and shimmering on the grasses below. I kept capturing more and more images as the sun climbed higher bringing more of the landscape into the warm glow of morning. Finally, the sun got too high, and I called the morning a success. It was an excellent start to an excellent day, and I have plenty of other photos from this adventure to share. But for now I will leave you to enjoy this morning view on the Brazos River. 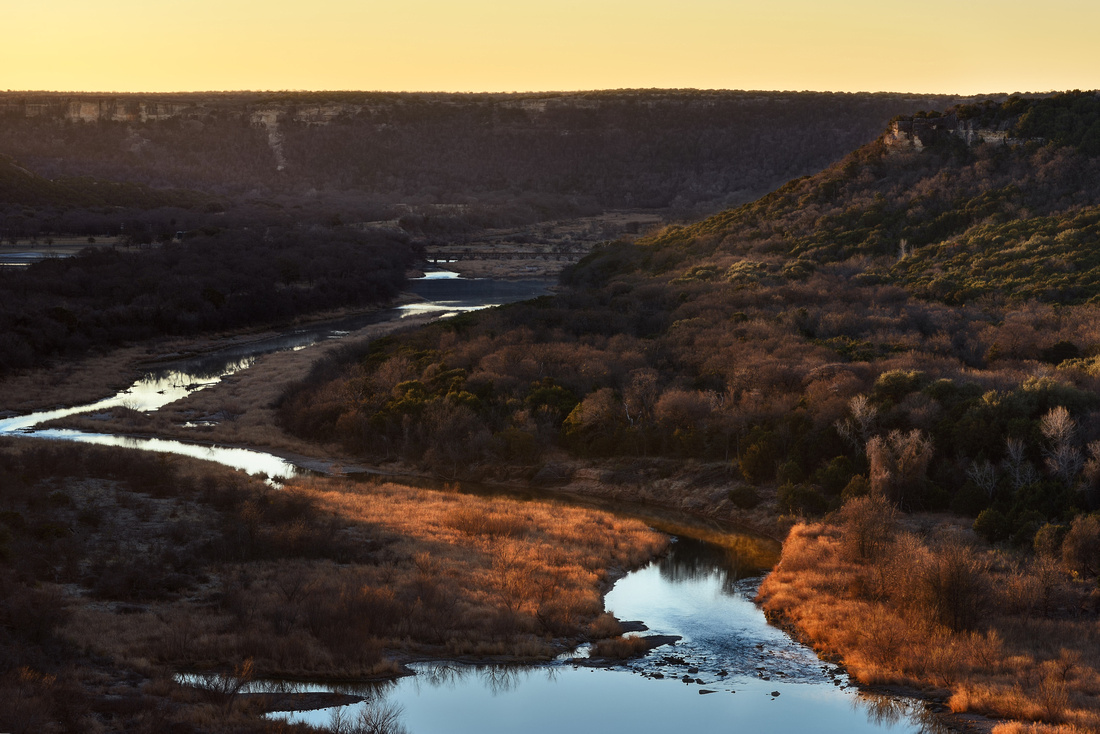 View on the BrazosLooking downstream of the Brazos river from the dam at Possum Kingdom Lake.