A sharp glint of light reflected on the inside of my glasses’ lens. I turned my head to see what the source of the illumination was. A car was stopped at the intersection a few streets down from us. “Don’t turn left!” I pleaded to the driver in my mind. It was odd that there even was a stop sign at the intersection. I can’t imagine this area gets too much traffic. It was hard to believe that this community once held a population of 200 compared to its modern population of less than 50 (2010 census). The car made the unfortunate left turn and sent high beams of headlights across our scene and subject. The Parthenon like structure glowed with an eerie yellow hue as the card headed towards us. It made another left turn and the light dissipated on the structure. My camera’s shutter clicked, and I said out loud “Well, there’s a photo I’m going to have to blend out.” I turned my attention back to the scene in front of me keeping watch of more vehicles that could ruin my shot.

When Ashlee told me she was interested in trying star trail photography, I started thinking about potential subjects. Nothing in particular stood out (at least within an hour’s drive) and I started perusing satellite imagery from Google Earth. My search took me along the railroad and soon I discovered an unusual shadow near the northeastern corner of Hollister, OK. “That can’t be right.” I mumbled to myself. I used the Google Earth street view for a closer look and was astonished at what I saw. The remains of a large brick building with two columns and three openings stared right back at me on the computer screen. I had found our subject for the star trails shoot.

In the early 1900’s the Wichita Falls and Northwestern Railway (would eventually become the Missouri  Kansas Texas Railway) were searching for an area to put a switching station between Frederick and Wichita Falls. Land was donated and the switching station established and in 1909 the town got a post office. In 1922 the local schools consolidated, and a new brick building was constructed. The Hollister school served the area until 1963. Now, all that remains of this school is the front face and foundation. This would serve as an excellent subject for our star trail image.

We drove out there and arrived just before sunset carefully scouting and searching out our compositions. Once we found it, we could not move the camera, so we had to be certain this was going to be our shot. That night, we stood by the old remnants of school and pondered what it would have been like to attend. The night was quiet and peaceful except for some longhorn grumbling in the yard next to us and a dog alerting its owner of our presence. For a couple of hours we captured images of the stars rotating around the ruins. It took 280 images to create this final time-stack composite, but all the extra time and effort is worth it! I love the stars streaming behind the ruins and peeking through the openings. It really adds a lot of depth to the scene. The twisting motion of the stars remind me of a portal. Like a time warp transporting us back to the past when Hollister was a bustling city. What a great night out under the stars and an excellent, historical, and interesting subject! And if you want to see Ashlee's shot, check it out on her website here. 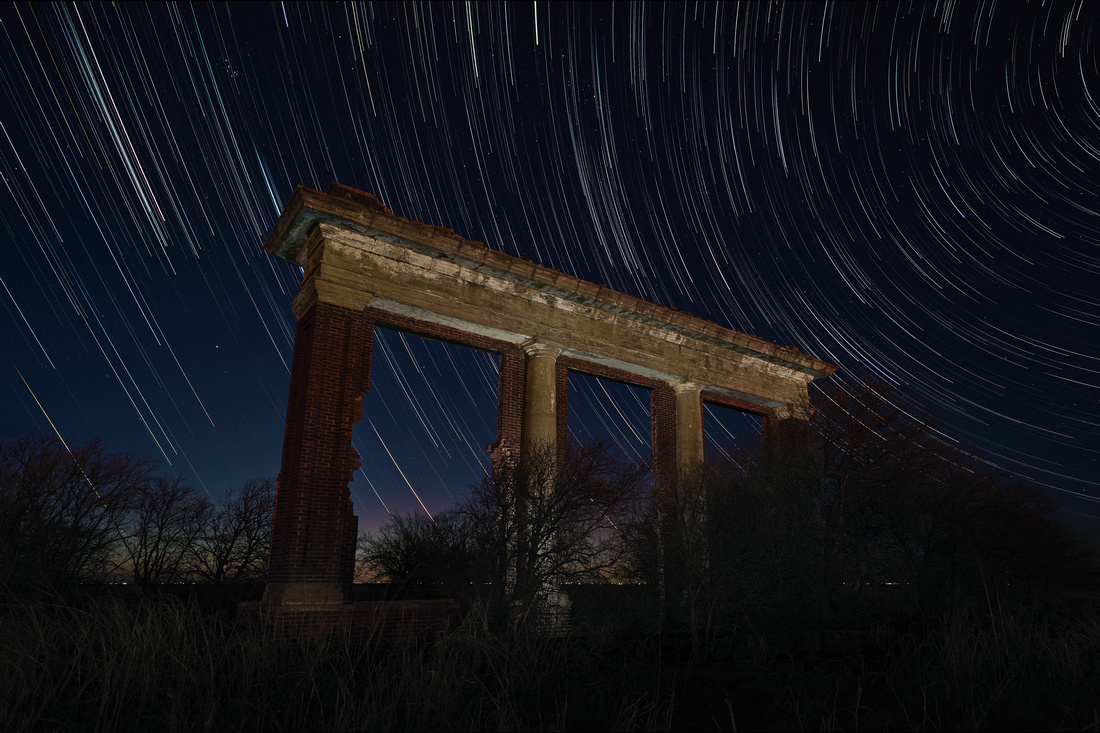