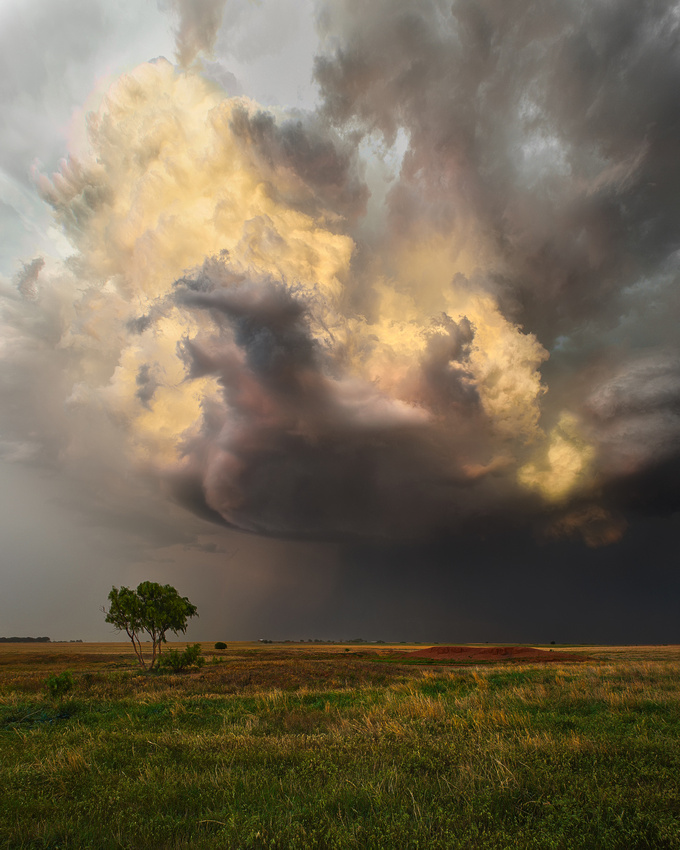 Sometimes, its nice to just stop and smell the roses…er…watch the grass grow? No, that’s not right. Its better to stop and watch a riveting performance in the heavens. A veritable meteorological theater show. The stage for this show? How about the vast southern plains sky? The cast? How about an isolated slow moving, low-precipitation supercell and a lone mesquite tree? Lighting? Yup, we got that covered too. Everything is in place, now you just need an audience. In a way, you could say the severe thunderstorm warning was the flyer to the show, and once it entered our county that was our ticket to the performance. With high hopes, we gathered our gear and waited to intercept the storm. Thankfully, there were a few to check out. We opted for the northern most storm as it made its way into Wichita County. Another photogenic southern cell was developing just west of town, and we could see it from our location. The skinny updraft was taking on a “barber shop” pole profile with several layers of helical striations. Our storm started inching closer and closer to our location. We had positioned ourselves in such a way that we had a front row seat on all the action. The show was about to begin.

The opening act started with a nice display of anticrepuscular rays emanating from the east. These gold beams of light dance delicately along the horizon. Act II started with a rumbling of thunder resonating through the open farmland. Bolts of plasma struck down from an elevated bowl-shaped base. Side light from the late afternoon sun shaped and sculpted the surging updraft as it towered into the troposphere. Not a bad way to start. While it was beautiful, I couldn’t help myself searching out more interesting subjects/characters. A quick scan of the surrounding area and I was able to locate a lone mesquite tree about 100 yards down the road.

Now things were starting to come together. I was introduced to a new character of the play, the lone mesquite tree, and I was excited to see how it would perform off the other cast members. It started out a little slow, but tension was building and as the sun sank lower in the horizon the drama started to crescendo. A dance began between the mesquite tree and the advancing supercell with the tree swaying in the wind. The storm churned, swirled, eddied, and undulated during its performance. The powerful chaotic motion was offset by the gentle trembling of the mesquite.

Finally, the piece de resistance appeared when the last gleam of light pierced the open sky and washed the updraft in a spectacular golden glow. It was such a large scene and such a short moment, that I was forced to record the photo with a handheld four image vertical panorama. Not long after I made my capture, rain began to fall and opening the final act of the performance. The storm had made its way more southward than east, and we were soon slammed with a sheet of precipitation. While I did appreciate the strong finish in the performance, I should have been more mindful of the parking situation. I sprinted on the wet asphalt back to my vehicle some 100 yards away.  Clutching my camera and tripod I ran through the rain and wind and finally arrived to the shelter of my vehicle. Ashlee was already there waiting on me. I sat in the car panting drenched in rain while the storm raged on outside. With a thunderous (see what I did there) applause, we said goodbye to the storm and made our way out of the rain. Five out of five stars. Would definitely go again!