This is the last photo from our 4/23 photography day. I have already shared two other stories from this day. I’ll pick up right where I left off from the previous post—just after it started raining on us. Little sprinkles of water quickly turned to a drenching rain causing the red dirt roads we were driving on to become soft and mushy. Luckily, I had my 4WD and bigger tires to keep us grounded on the slippery path. The road took us east and then south as we made our way to highway 54. It wasn’t too long before we were out of the rain and looking back to the north to see Cutthroat Gap and our previous subject, Baker Peak, become engulfed in a curtain of precipitation. Bright flashes of lightning crashed to the ground signaling to us we were too close to the storm. We decided to continue north and wait for the storm to pass over the mountains.

When we reached highway 19, we turned west to the town of Roosevelt, OK. Storms were beginning to go up along the dryline and we could see some thunderheads in the distance. We still had a few hours before sunset, and we went searching for a good location for sunset shooting. We drove south on 183 through the Glen Mountains and Great Plains State Park/Tom Steed Reservoir. The pyramid shaped mountains in the distance caught our eyes a few times. Maybe we could use those in our sunset shoot? We pressed on southward watching the towers build just to our northeast. Stopping outside of Mountain Park, we found an unusual old structure to frame against the developing storms. We stayed here for a while before moving on towards Snyder. 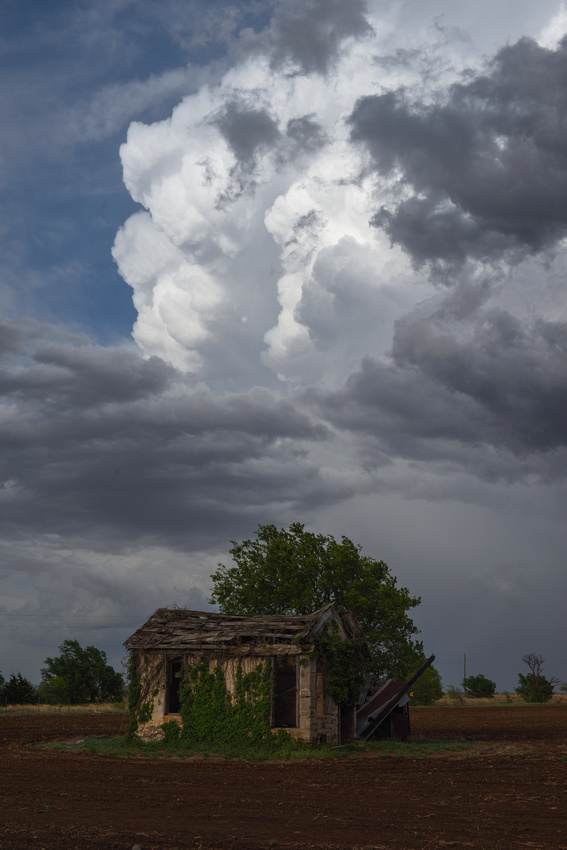 Thunderheads build above an abandoned structure near Snyder, OK.

The storms passed and we pulled into a gas station in Snyder to plan our next move. Sunset was just under an hour away and the storms building further southwest looked to impede the good light and color. With that in mind, we tried to find a good view of the distant mountains but were unsuccessful in finding a road with a good view. A little distraught, we tried to salvage the sunset by driving near the mine on Long Mountain. But once again the roads were not in our favor, and we were met with a gated entrance. We turned around and began thinking of another plan. Then, the eastern sky exploded in a brilliant orange hue. With nowhere else to go we stopped just at the base of the mountain and gazed on the incredible light show that was going on over the distant mountains. Ashlee got out her camera to attempt to capture something from the sunset, but I already knew it was lost. I turned my attention to Long Mountain in hopes of maybe capturing some lightning over the peak.

The storms to the southwest had evolved into mature supercells and we starting to catch a glimmer of the last of the sunlight. A small window between the clouds allowed just enough light to poke through for a short duration. Slowly, the light started to get better and better. The faint pinkish hue transformed into a brilliant orange glow reflecting off the storm tops. It was so bright and vivid that the wet boulders on long mountain reflected the incredible color. I didn’t have much of a foreground, but I still had to try and capture something from this scene. I zoomed my 24-70mm lens all the way to 70mm trying to fill as much of the frame with the mountain and the storm clouds. I captured this image at the peak light—the height of the sunset. There was something almost ethereal about the scene. The way the clouds swirled above, and the grass swayed in the wind made the whole landscape appear to be alive and breathing. I stood amazed as the clouds billowed, the wind howled, the thunder boomed, and the color waned. Shortly, the entire area was under a blanket of blue as the last light faded and night settled in. 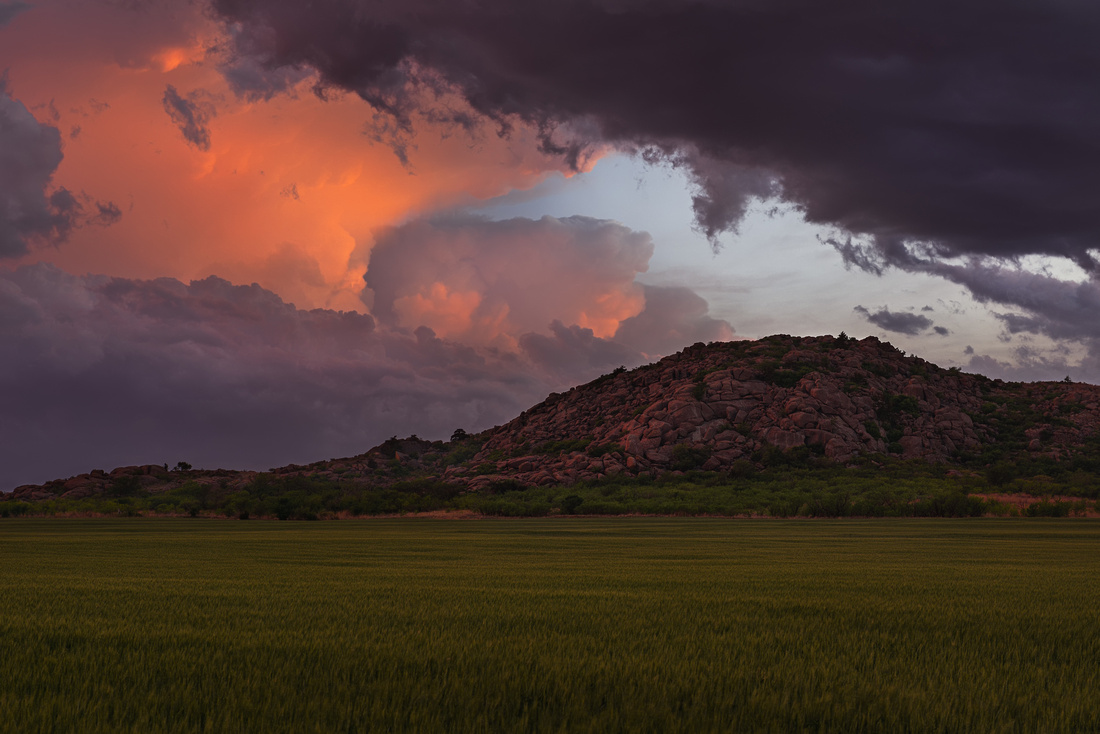 It was the perfect end to an amazing day of photography, though the drive back home was quite eventful with storms, hail, and lightning. We were both so tired from the driving and adrenaline that we agreed to just continue to our apartment. I spent a little extra time carefully processing this one to bring out the color as accurately as my memory would allow. It truly was a fantastic day of photography!