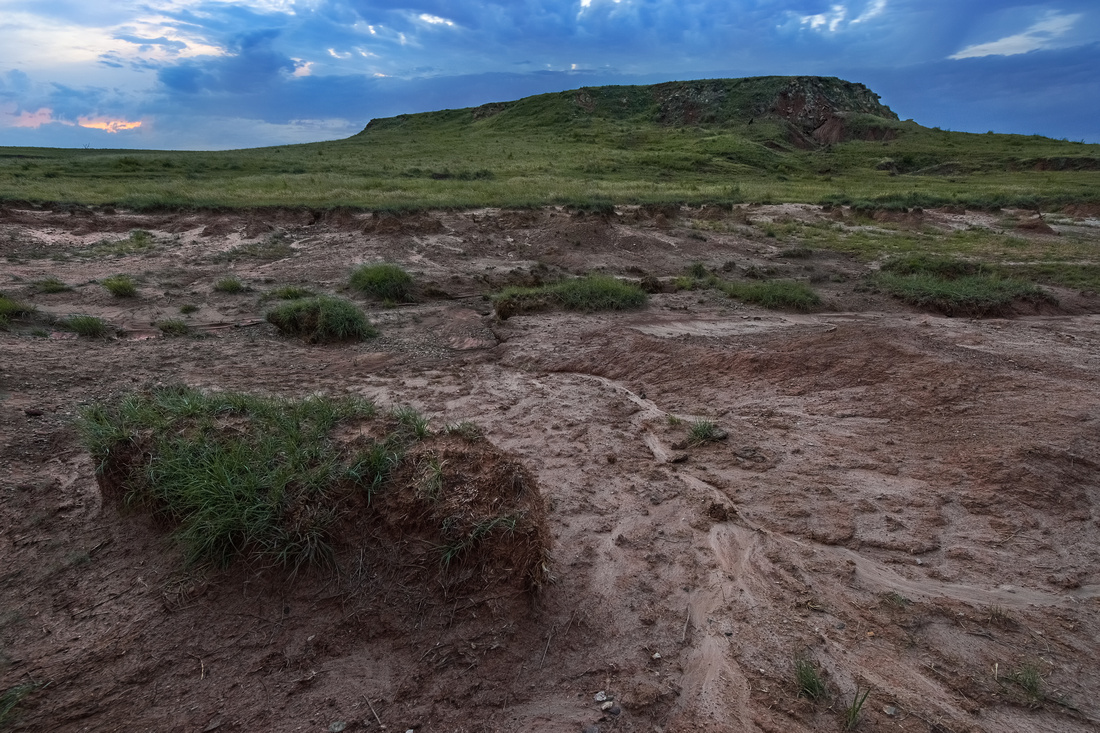 Broken EarthWater and rain errode the soft dirt in this drainage. Vegetation takes root and holds the soll together creating tiny islands of brush and grass in the red dirt.

Things have been bit busy lately and I haven’t finished editing images in a timely manner, but I will have some new ones to share in the coming weeks. For this weeks Pic of the Week, we must go back to last month where Ashlee and I took a gamble, but you can ask yourself if it paid off or not. Once again, we found ourselves sitting around the apartment eager to go out and photograph something. The weather was decent, and clouds looked to be quite favorable for a nice sunset. Storms were predicted to develop into the early evening and overnight, but that only motivated us even more. I was hoping we would take the short drive to a location I have named “Broken Earth” just across the river in southern Oklahoma. It didn’t take much coaxing to Ashlee on board and soon we were loading up and driving to the location.

Its important to note that I have never been to this area before and I didn’t really know what to expect along the way. We crossed the Red River and into Oklahoma and drove east on highway 70. This drive is always pleasant. There are several small hills and gently rolling terrain along this drive. Occasionally, you can catch glimpses of the Red River in between the mesquite and wild plum brush on the tops of the hills. Our route took us past a familiar spot where a bend in the river meets up with Highway 70. I shot a milky way image here a few years back after the river had flooded. Not long after passing the landmark we got off the highway and started scooting along the backroads. Time to put the vehicle in four-wheel drive.

Driving along the rough dirt and gravel roads of rural Oklahoma we pass by several potential astrophotography subjects including things like run down barns, old windmills, scenic high points, and stock tanks. Eventually, we reach our destination. The “Broken Earth” is larger than I expected and while it looked great on satellite, its hard to convey the depth in the scene and I turn my attention the mesa just to our north. This would serve as my background and center of attention in my composition. The clouds had started to roll in by now and it looked like our sunset chances were squandered. There were small hints of color hitting the very top of the clouds, but it was looking like we busted.

While gathering up our gear, I spotted one more composition and decided to give it a go. I put on my ultra-wide Tamron 15-30mm lens and lowered the tripod to near ground level squeezing the camera under a barbed wire fence. This brought a tuft of dirt and grass in the lower left balancing out the mesa in the top right. I also took advantage of the great leading lines left over from intermittent stream that runs after a good rain. This helps draw the eyes into the scene and back to the center of attention. When processing the photo, I used a triadic color harmony of green, blue, and red to help bring about cohesion and depth to the photo. So even though our gamble didn’t pay off for a sunset, we still got to explore a new area and I got a very pleasing shot from the experience.