My mind was racing at 100 thoughts per second as I raised and positioned my tripod. No doubt, there was only a few moments left of the spectacular display of color overhead. I was mentally smacking myself on the forehead for not finding an alternative composition earlier, but I suppose I became so fixated on my other shot that it was the only thing on my mind. You should always plan and have a backup composition in mind—especially when the light starts to kick off. After completing a successful shot of Panther Canyon, I started seeking out another composition. Scrambling to find a subject, I took to higher ground at the top of the Panther Canyon Overlook. The view down the canyon was now obstructed by the top of the cliffs, but Mount Marcy could be seen on the northern horizon. The sky overhead was just starting to ignite in a fiery glow.

A small rain cloud had moved overhead and began to sprinkle small drops of precipitation on our location. It didn’t last very long, but it did block the setting sun and gave me enough time to keep searching out a foreground. Shades of orange and pink began to stretch throughout the sky. The most vibrant and brilliant of which, stopped just over the summit of Mt. Marcy. I was frantically looking for some kind of foreground element to incorporate in my shot. Would this cactus work? What about this bush? Maybe one of those dead cedar trees? Nothing seemed to align right with the sky, and I was beginning to lose hope. I did find a cluster of boulders, but they were much too close for the lens I was using. If only I had brought my ultra-wide angle, I could capture this image.

The rocks were nothing special and very typical of the area. There were some interesting textures and shapes to them with just hints of bright-colored lichen. One thing I did notice, however, was the diagonal shape and lean of the boulders. These natural leading lines could work well to bring the viewer from the foreground to the background of the image. In a last-ditch effort, I decided to capture a four-image panorama of the scene. I focused for the rocks in the foreground and snapped a frame, then tilted my camera up towards the sky, refocused, and shot another frame. I then rotated my camera to the left, captured another frame, and tilted the camera down, refocused on the rocks, and captured my last frame. It wasn’t until after I made this series of images did I fully appreciate the scene before me. 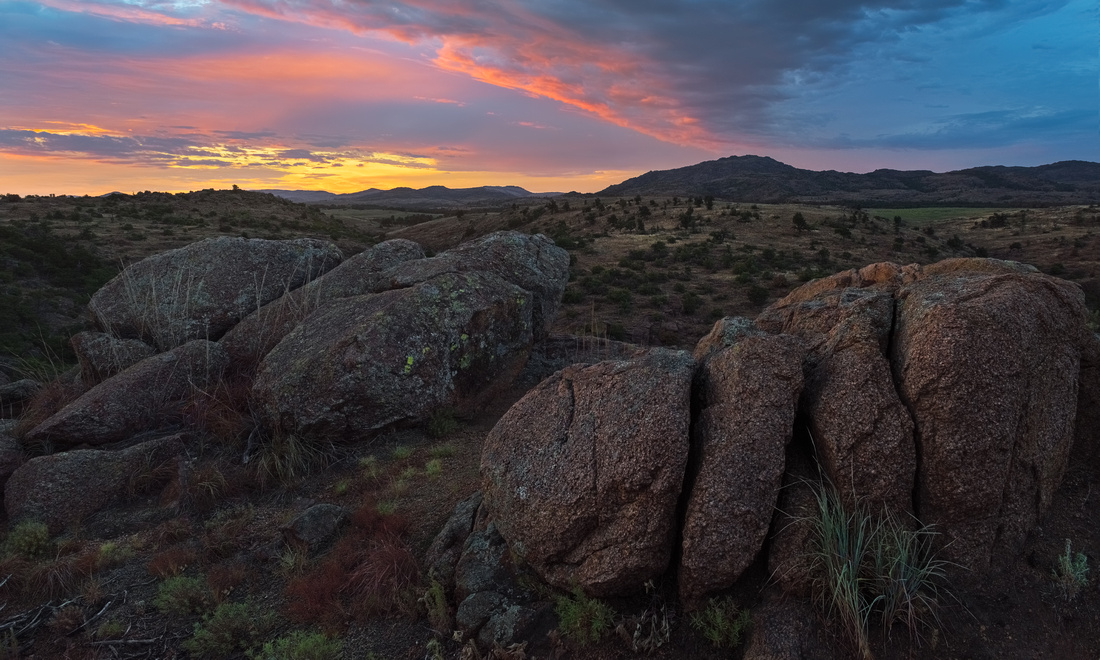 Panther Canyon Overlook PanoramaLarge boulders top the 100 foot cliffs that run along the southern side of Panther Canyon. In the distance Mount Marcy looms over the open prairie and guards the Special Use Area of the refuge.

The sky had erupted into a dazzling display of pink/orange glow next to a cobalt blue clouded sky. Strips of gold and yellow were lined along the horizon bringing out the silhouette of the distant mountains. Faint reflected light was shining down into the canyon and around the canyon walls. This extra splash of light helped separate the midground from the foreground. Lastly, the foreground was almost devoid of any light whatsoever, with just the smallest inklings of light bouncing off the scrubby vegetation and brightest parts of the rocks. Although under the same light, there was still just enough variation in color, size, and shape of the boulders to portray the depth in the foreground. The natural complimentary colors of green and red in the foreground plants help break the foreground up even more adding wonderful detail and anchor points for the eyes to rest on. The converging diagonal lines created by the sunset clouds and the shape of the rocks lead the eyes through the scene and to the main center of attention quite effortlessly. Anywhere you look there is something interesting in the photograph.

Now the light and color were gone, and it was time to get back to our vehicle and call it day. Our spontaneous sunset shoot in the Wichita Mountains was complete and both Ashlee and I captured some beautiful photos. You can see her interpretation of the sunset on her website here. It just goes to show, sometimes you gamble, and it pays of in a very big way!