I guess you could say I have a fascination with old relics and the night sky. In fact, if you browse through my NIGHT gallery you’ll find quite a few images with abandoned houses, dilapidated buildings, and downtrodden churches. There is something I find compelling about photographing the night sky above a remnant of the past. There’s a dichotomy in which the structures and buildings are decaying and crumbling, but under the same sky that was there all those years ago. During the pinnacle of their existence, the same milky way galaxy hovered over their roofs providing the same wonder I feel today. I suppose there’s a comfort in that sentiment.

Several of my nighttime subjects have been preyed on by old age and weathering. They no longer stand erect and collapsed into a disheveled piles of debris and ruins. The most recent of these (and one of my personal favorites) “Slamma Rd Barn” has unfortunately met its demise. 100 years of history swept away in the gust of a thunderstorm. This helps me realize the urgency in which to document these old historic places. On a drive through Grandfield, OK I noticed one of my subjects on the verge of complete ruin and I knew I needed to capture it before the next storm season rolls in.

This old homestead has been on my radar for a few years now, but I just now got around to photographing it. I haven’t done too much astro-landscape photography this year and I knew I wanted this house in front of the milky way. Better late than never! Ashlee and I drove the short distance out to the location and arrived just in time to catch the sun setting in the western horizon. Conditions looked promising as only a few wispy clouds hanging around the south. When we pulled up, I noticed a small cable fence blocking off the entrance to the homestead. A little disappointed, but respectful of the owner’s property, I found a composition behind the fence line that framed the little home around a small planting of trees. The milky way would be rising in less than an hour, so I needed to lock in my composition soon.

The home sits on the south side of US highway 70 just southeast of the Grandfield municipal airport. This would be in our favor as the light from the airport's tower would illuminate the house during our long exposures. Since it is so proximal to the town, the area does suffer from light pollution and two radio towers poke above the house. Nothing a little Photoshop can’t take care of, however. The house itself is a modest prairie home with what appears to be gothic or tudor influences with windows underneath pitched roofs with overhanging eaves. At one time it looked like a handsome homestead, but now the winds have pushed it beyond its structural limits and it has started caving in on itself. The west wall is leaning inward bulging out the north and east sides. The whole thing is warped and twisted in a way that reminds me of Dr. Seuss illustrations. The house does have a lot of character, however, and it makes an excellent subject for nighttime images.

When the sky was dark enough, we began taking images of the milky way above the old homestead. It was a peaceful time that allowed me to imagine what this house was like in its prime. In the daytime, this looks like a rough and ugly structure, but nighttime gives these old ruins a new life as they open windows into the past. What would it have been like living here? No doubt you had to have real grit and fortitude to live in this environment. With little trees the winds would be relentless, the summers brutal, and the winters inhospitable. But someone made it their home and I bet they sat out watching the stars every night staring at the same milky way I was seeing through my camera’s viewfinder. 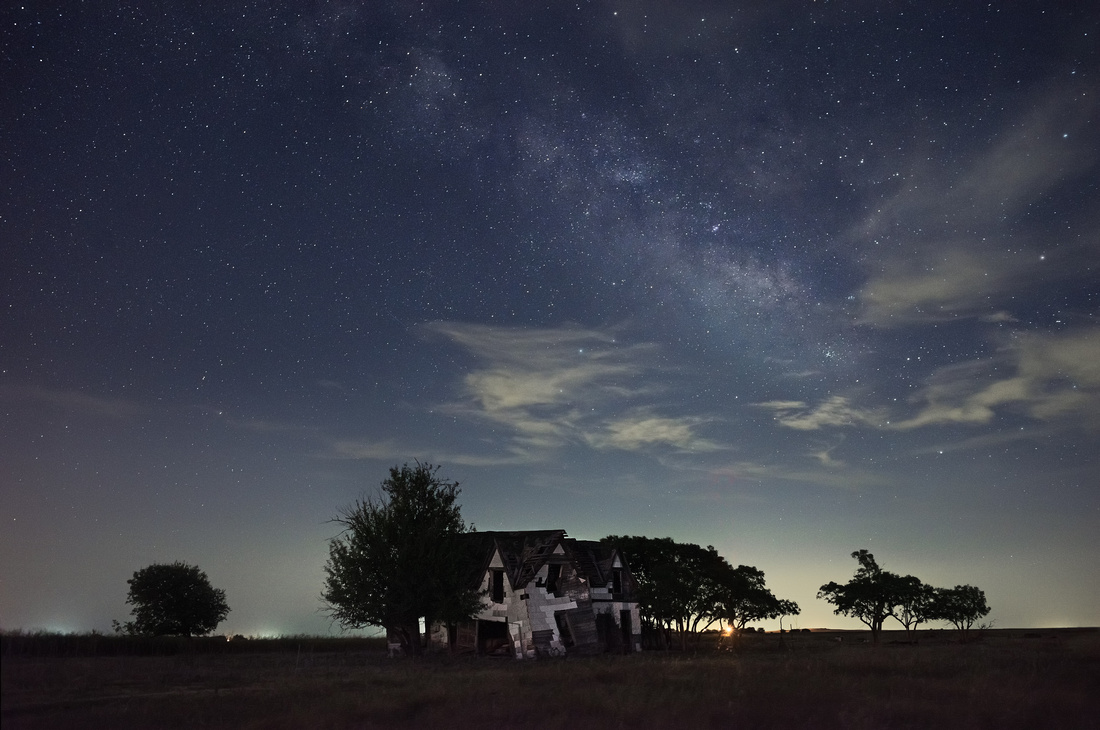