Oh, it has been WAAAAYYY too long since my last camping trip. During the summer months, I rarely do any camping…at least in Texas that is. But since I haven’t gone anywhere colder, there has been very little camping done this summer. If I am going to go out and brave the heat, it needs to be in a area that will result in good photography or hiking. Someplace a little farther away. Maybe a home away from home, where the official Texas state bison herd roam? I am talking of one of my favorite weekend getaway sites in west Texas, Caprock Canyons State Park.

I have had numerous visits to Caprock Canyons over the years, but almost always I have not timed it right with conditions. I’m either greeted to open empty skies or blotted out by thick low-lying clouds. For whatever reason, I just can’t seem to get good light while out there. This trip was no exception, but this lack of photogenic conditions in a photogenic area makes it more of a challenge to find a good photograph. Thankfully, there is plenty to explore at the park.

Ashlee and I would be camping along the bluffs of the Little Red River. I don’t need to tell you we were both excited to get out of Wichita Falls and into the rugged west Texas canyonlands. When we arrived on site, we first decided to scope out our shooting location for sunset.  I would be targeting the cliffs along Holmes Creek Canyon. I have visited this area before and shot a unique photo of the milky way galaxy rising above the horseshoe-shaped bend in the creek. With a full moon expected shortly after sunset, I didn’t have any definite plans to shoot the milky way. I was, however, interested in capturing some close ups of the canyon at sunset.

The hike to the canyon overlook isn’t far from the parking area. After we parked at the Honey Flat Campground parking lot, we started looking for the Canyon Spur Trail. This sandy trail connects to the Canyon Rim Loop and would lead us to the overlook. From the overlook we would look down into Holmes Creek and look across to the fascinating canyon formations. Since we arrived on location early, I had plenty of time to scout out multiple compositions. The only problem was deciding which to shoot first. My attention was on the pyramid-shaped rocks hugging the creek across the canyon. Previous floods and rains have carved through the soft sandstone to form the deltoid and triangular cliffs of the canyon. I turned back to the west to see no clouds on the horizon. Looks like I’d be breaking out the telephoto lens.

"No sky is better than a bad sky." I’ve said this many times before and after inspecting my subject, I chose to exclude the sky from my image. Instead, I would focus on the shapes and textures of the canyon. Walking along the rim, I could see dead cottonwood trees in the creek bed below. Their bleached trunks and branches were gleaming in the late afternoon sun. I found an attractive set of these dead trees to use as anchor points and leading lines in my shot. Once the sun sank below the top of the canyon, the trees would be covered in the shadows. Their bright scraggly bodies would really stand out against the darker rock of the canyon. I had locked in my composition and now it was time to get ready for sunset.

Shadows began to slowly creep into the canyon as the sun started to fall. The cottonwood trees remained poised and stoic as the shadows overcame them. The last rays of sunlight blasted the tops of the cliffs in a beautiful orange glow. Hues of gold, orange, vermillion, scarlet, and magenta spilled across the east rim of the canyon. It reminded me of a sunset I captured on the North Rim of Grand Canyon National Park several years ago. I tried to time it just right, so the light lined up with one of the geologic layer edges of the cliffs. This made their transition even more apparent. As you follow the cliffs down to the creek you go farther and farther back in geological time.

The pointy summits of the cliffs began to fan out into the ribbon, curtain, and skirt formations so associated with west Texas canyons. Each of these cliffs create lines that lead the eye through the photo down into the creek and back up the cliff tops. I made sure to carefully compose the photo taking note of the live cottonwood in the bottom left and the far right. This creates a really nice bookend to the whole image and balances the composition as a whole. Although, I didn’t get any spectacular clouds in the image, but I still think I captured the peak of sunset in one of my favorite places to shoot. There are a few more images from this trip that I will be sharing  in the coming weeks. Meanwhile, I’ll keep watching the weather models and hoping the autumn temperatures come real soon. 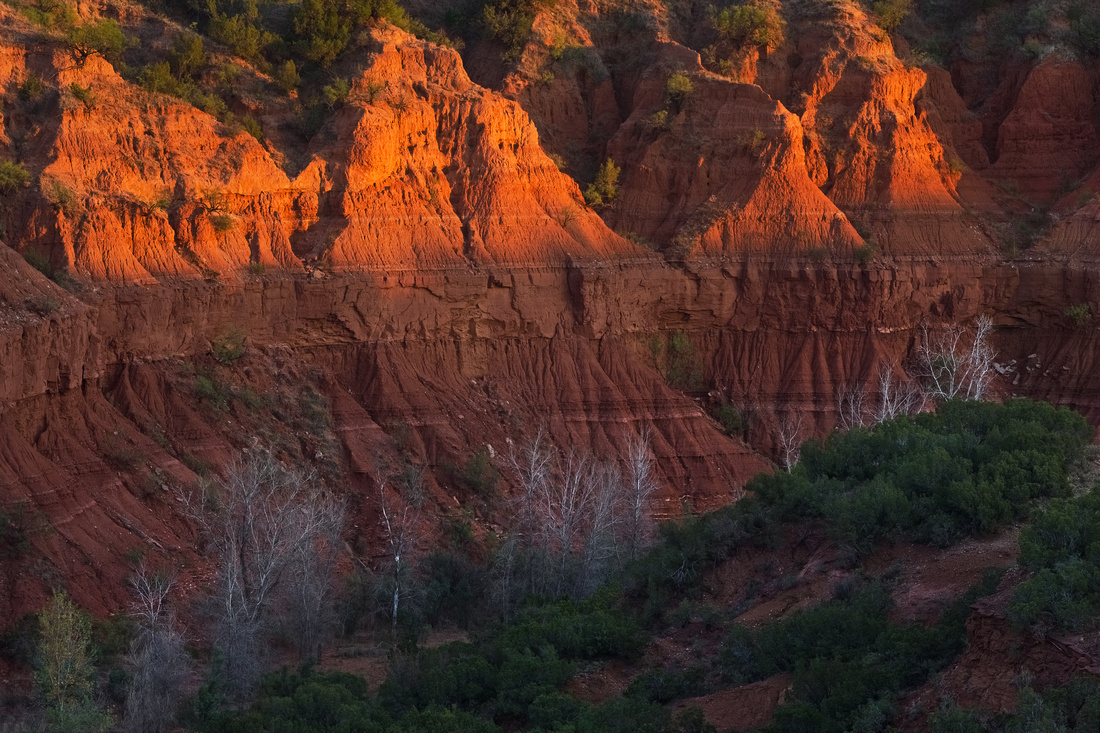