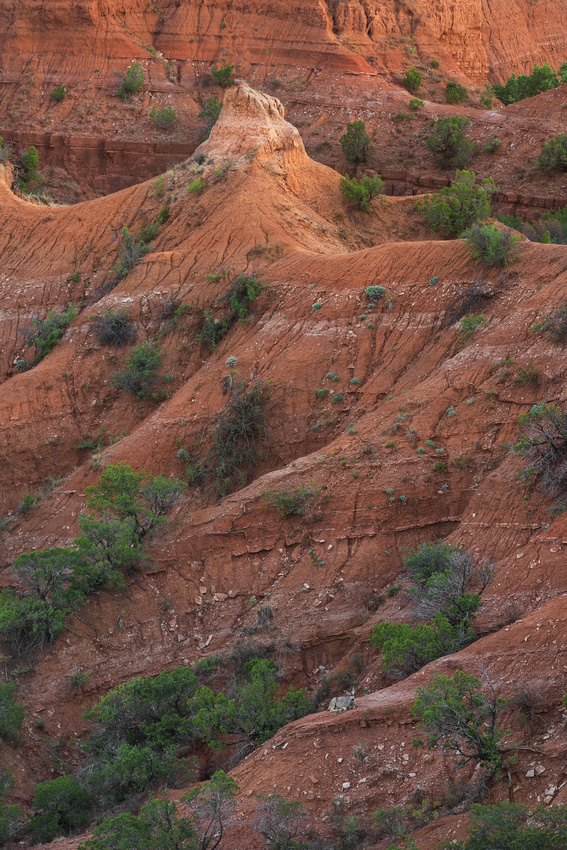 Doe in CanyonA mule deer do finds a tranquil place for a rest in the rugged terrain of Holmes Creek Canyon.

I spy with my eye something brown. Do you see it? It took me a minute to find it myself. Ashlee on the other hand, had been tracking and following this deer for quite some time. During our sunset shoot in Holmes Creek Canyon, Ashlee veered off to the south in pursuit of wildlife to photograph. While I concentrated on the landscape, she was getting to know a few of the locals with her camera. It wasn’t until well after sundown, did I meet back up with her. Her attention seemed to be focused on one of the canyon mesas. I thought she was just photographing the rock spire jutting up from the mesa.

I asked her what she was shooting now that the sun had set, and she said a deer. Ashlee showed me the back of her camera and I asked her where the deer was. It took a minute but eventually I saw the doe lying down on a flat surface on the canyon wall. There was very little light left on the scene, so I was only able to capture a few frames in the soft reflected light. But this scene was so cool, I just couldn’t pass it up. The doe gives the scene so much more scale and you really get an idea of just how big these rock formations really are.

The zig-zag leading lines help draw the eye throughout the scene and the white gypsum intrusions in the red rock create an excellent contrast. We photographed this doe until the light in the canyon was completely gone, and we started off towards the car. The clear skies and cooler temperature was a nice shift from the heat of the day and soon we were at our campsite winding down for the night. After a nice dinner of tuna fish and spinach wraps, nightfall started to descend on the canyon. The milky way galaxy began to shimmer in the southern sky. We made a few shots at camp before the moon rose above the canyon rim. Silver light flooded the canyon walls and revealed all the canyon details. With the extra illumination, I thought we could try a few moonlit landscapes near our camp.

There was an area that looked like it would provide a nice view of the Little Red River and the canyon walls in South Prong. We carefully, hiked along scattered game trails behind the campsites and eventually we found the viewpoint. This view let us look down into the dry riverbed creating a natural leading line through the photo. A stripe of gypsum lined the farthest canyon wall giving the scene even more contrast. The foreground remained in the shadows with only hints of reflected moonlight lighting the small details. In the upper right you can see some park visitors who made camp. Looks like they selected a nice location. Most of the campsites in the area offer views like this. 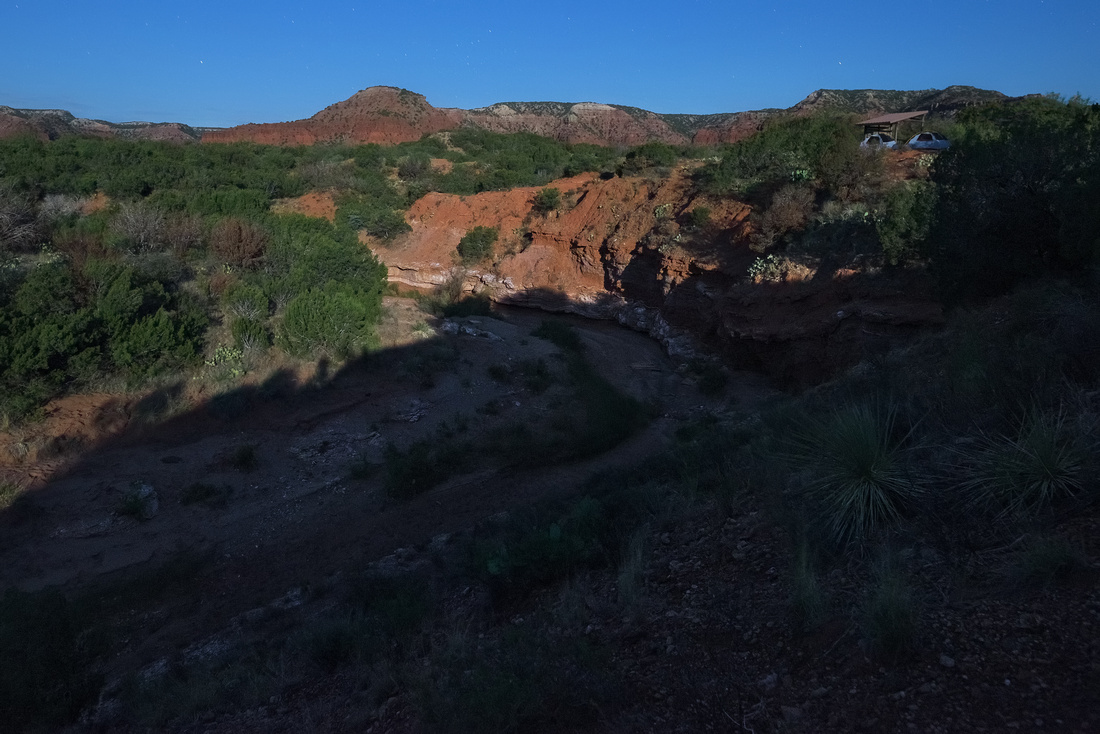 After our moonlit shoot, we returned to camp but were stopped along the way by our neighbors. These were some hiking friends of ours and we spent the next few hours swapping stories, talking about future trips, and enjoying the camaraderie in the light of the moon. Finally, we returned to our tent and tried to fall asleep. From all the excitement of the day, it was difficult to go to sleep. Somewhere between watching the night sky above our heads and listening to the coyotes call in the canyon I drifted off to slumber satisfied with the images I captured that day.