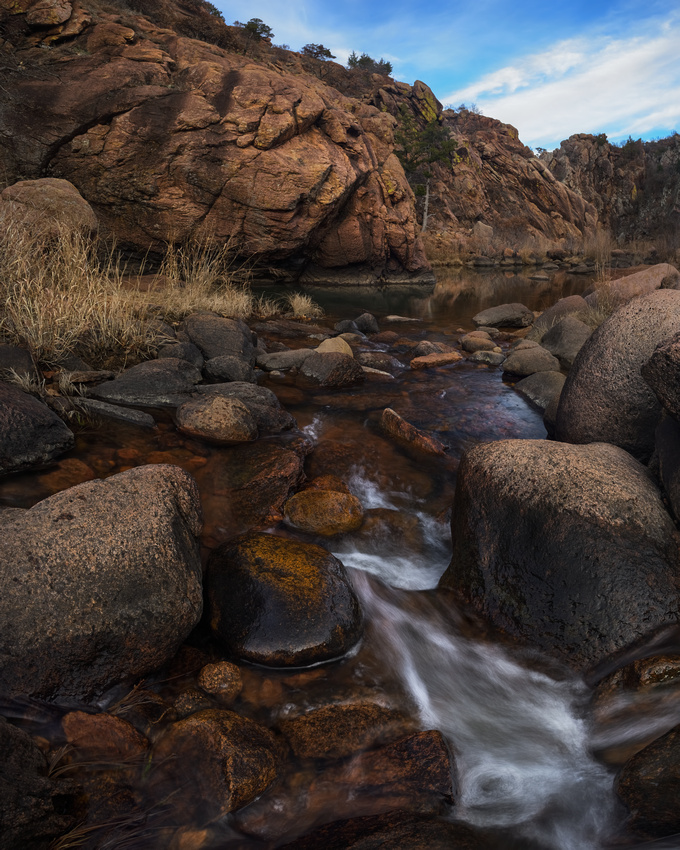 Continuing from our previous blog post, we are still on our New Year's Eve adventure in the Wichita Mountains. After shooting that calming cascade near the Narrows trailhead, I started making my way deeper in the canyon until I came to the improvised creek crossing that continues the trail. Here, a small stream of water was rushing down small boulders and rocks. I wasn’t interested in hiking in wet socks, so I tried to boulder-hop my way to the running water. Although the stream was nice, I couldn’t find a good way to photograph it—that is, until I turned around.

Looking over my shoulder, I caught a shimmering reflection in my peripheral vision. This rock had been sitting in the creek for so long that the constant assault of water had polished the rock to a mirror-like finish. This immediately captured my attention, and I started to look for ways to incorporate it into a shot. At the end of the fall, a natural eddy formed, creating a donut-shaped pattern in the water—another element I would try to add into my frame.

With some careful coaxing and scooting on my rear, I pressed myself against a rather pointy and uncomfortable boulder in the creek. Now, I could start to see my composition take shape. The creek would flow in from the right side and help guide the eye to the scattered rocks and then to the reflection of the tall cliffs. I had found my composition, but I did not have the correct lens for this shot. My trusty 24-70mm f/2.8 lens just wasn’t wide enough to record the extent of the scene. I could use my ultra-wide-angle lens, but since I was photographing water, I wanted to make use of my circular polarizer. Unfortunately, I cannot adapt filters to my ultra-wide angle.

Thankfully, I thought of another idea that would work. I would simply shoot a panorama to capture the scene. This image was made up of four images that were stitched together to form the final view. My camera was pointed nearly 90 degrees downward to capture the first shot. After each image, I would tilt the camera up until I reached the sky. Shooting panoramas is always a risk, as you don’t know exactly how the final image composition will look after everything is combined. Basically, you "roll the dice" and hope your camera is level, the image is in focus, and you don’t screw up your settings.

I am very happy to say that this panorama came out excellent! I love how much movement there is in this photo. Starting from the bottom right with the water streaming in, it takes you directly to that polished rock that caught my attention in the first place. Then the water stretches into the middle ground, where rocks and boulders continue the line and bring the eye out to the reflection. There is also a great "lean in" effect with the rocks in the lower left, which also help point the eyes to the middle ground. The eyes are then met by the cliffs, which form a wall, which moves the eye down the creek and around the bend to the next cliff. Finally, the eye moves to the brightest part of the scene—that patch of blue sky and thin white clouds reaching over the cliffs.

After capturing this image, we continued on the trail and to the Narrows overlook. I would love to say that we captured a spectacular sunset from the overlook, but we were late and missed the sunlight in the canyon by about 40 minutes. Although I didn't get the shot I anticipated, I was still quite happy with the images I did capture. The day was not a total loss; as we were leaving the Boulder Picnic Area, I spotted another composition just outside the gate, and I photographed a pleasant scene of the mountains overlooking the Fish Lakes. All in all, it was a fantastic, much-needed trip, and the perfect way to bring on 2023.