On the eve of 2023, Ashlee and I decided to celebrate in grand fashion. While others were gathering with their friends and families, awaiting the big ball to drop and bring in the new year, we were boulder hopping and trying not to get our feet wet in Cache Creek. With the end of the year came a bout of unseasonably pleasant weather. Temperatures were forecast to rise into the upper 60s. I thought this would be fantastic camping weather, but unfortunately, we were not able to go camping this time. Not to be deterred, we decided to spend the day in nature.

This time our route took us along the west side of Fort Sill and the southwestern border of the Wichita Mountains. Along the drive, Ashlee spotted a harrier, a red-tailed hawk, and several other birds. Ashlee and I decided to part ways so she could go photograph the wildlife off the side of the road and I would drive up to the Indiahoma Gate parking lot. This wasn’t too far from her location, and it allowed me to start scouting out some compositions for this evening’s sunset.

I was interested in photographing an area we call "The Badlands." I assume this is a dry creek bed, but I honestly have no idea what formed this location. I do believe water was a major factor since most of the rocks have smooth, striated patterns to them. Regardless, I scoured the desolate landscape and searched out some comps. What fascinates me most about this area is all the different textures and patterns found in the rock. It is almost like a miniature White Pocket, and it is so fun to look for photographs. However, it is incredibly difficult to find a pleasing and interesting composition. After a few hours of scouting, we were ready to move on to see what else we could photograph before sunset.

Clouds started filling the sky, and it looked like our chances of seeing the sunset were slipping away. We took advantage of the overcast skies and drove to another photogenic area of the refuge—the Narrows. The Narrows, located in the refuge's south central region, is a popular hiking and rock climbing destination. Years of flowing water have carved a deep canyon through the mountain in this area. Many people, including us, are attracted to the emerald-green waters and high canyon walls.

We pulled into the parking lot next to the Boulder Picnic Area, quickly gathered our gear, and got on the trail. The official trail of the Narrows stops at an overlook in the middle of Cache Creek, but there are several off-trail chutes that will take you to the banks of the creek. We explored some areas around here, and it wasn’t long before I found a composition that grabbed my attention. Along the creek, there are a number of small cascades and waterfalls, and I found a nice collection of water and rocks. Water was tumbling down the creek and diverging as it crashed into small boulders. This created a natural "S" pattern that I would use to lead the eye throughout the image.

After capturing several shots of varying compositions, I placed my camera closer and lower to the falls to change the perspective. I also rotated my camera in a vertical orientation to include more of the foreground in the frame. Since I was so close to the foreground and my subject, I would need to focus stack the image to ensure sharpness throughout the entire photo. Four images were captured at different points of focus to cover the wide depth of field. Then I would line them up and blend them accordingly in Photoshop. It was a little extra effort, but I think it pays off in the end. We would spend the remainder of the afternoon and evening in the Narrows, and although our sunset didn’t turn out as expected, we still managed to bag a few good shots. I’ll share those stories later next week. 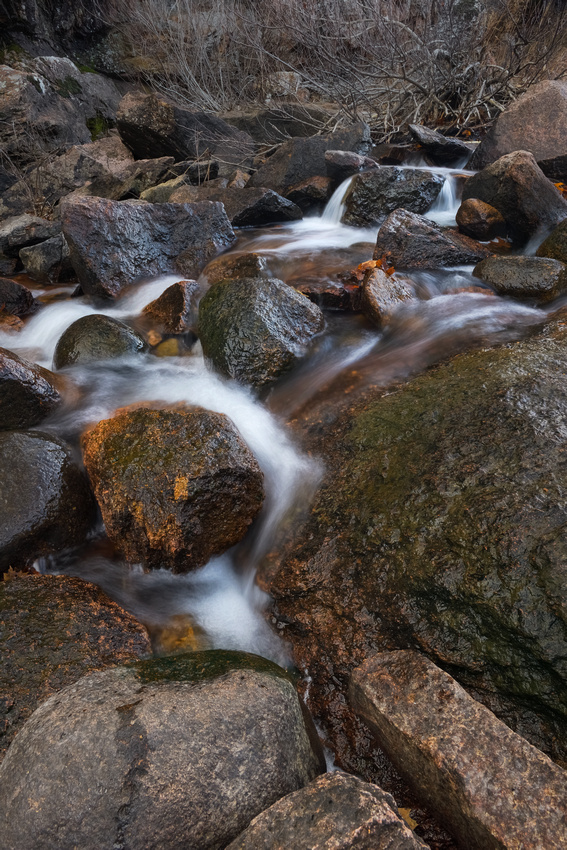 Tumbling Down Cache CreekWater from high in the mountains tumbles into West Cache Creek in a photogenic area known as The Narrows.